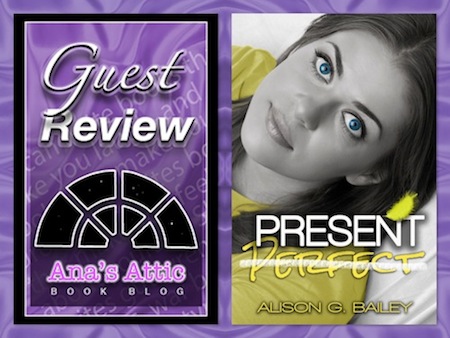 This is my first time having a guest reviewer here at Ana’s Attic. There has been so much buzz about Present Perfect by Alison G. Bailey. I have read from people who I trust implicitly that it is one of the angstiest, but best books of the year. The reviews are phenomenal. But I have also read enough to know that I would be a puffy faced, tear-streaked, red-eyed mess after reading this, and those who know me well say I better have a good case on my Kindle, because I’ll chuck it at a wall while reading this.

Even knowing I’ll love it in the end, I just don’t want all that angst. And with a gazillion books on my kindle I’m dying to read, I decided to sit this one out and let my good friend Joanne write the review. She has very similar tastes as mine, so I trust her. Will guest reviewing be a regular occurrence? Probably not too often. I don’t feel I can add books to all of my Favorite Lists if I haven’t read them myself. And if they get a great review, I’ll want to read them anyway, then what would be the point?

So without further ado, here is Joanne’s review of Present Perfect by Alison G. Bailey.

I will definitely be in the minority here with my review of this “must read” of the moment. I liked it, I did not love it. They said I would need tissues, but the only reason I wanted to cry was because I paid for it (which incidentally is the only reason I finished it)

Here’s part of the blurb:

“I’ve been unsure about many things in my life except for one thing, that I have always loved him. Every single minute of every single day that I have been on this earth, my heart has belonged to him. It has never been a question, never a doubt”

And so begins the LOOOOONNNGGGGG journey of Amanda and Noah – born just a minute apart, and have loved each other since that precise moment. Amanda always felt a connection, always felt close to Noah and they were the absolute best of friends….so for 350 pages (I have my font on blind so my copy was 402 pages including acknowledgements) we endure the following:

“He was my best friend and I wasn’t going to do anything to jeopardize that. I had to keep telling myself that nothing could ever happen between us.”

“You’ve always been my girl and always will be. No one will ever take me away from you, Tweet. You’re my heart and soul and that’s never going to change, no matter what you say.”

“There hasn’t been a day in my life that I haven’t loved you. I just wish you would let me love you.”

And she would push him away, because he deserved someone perfect and she considered herself flawed, I am here to say that if a guy said that to me – I would throw him down and keep him forever.  (Fuck you Amanda – you’re right he does deserve better than what you put him through).

I just wanted to punch her in the face.

So then we get around 75% in and the Author drops her “bombshell” but Tweet still  pissed me off, because she STILL DID NOT pull her head out of her ass – it took another person to finally make her see!!!!! Yes I felt horrible for Amanda (aka “Tweet”) but, I didn’t feel torn up over it – and it’s not because my heart is a block of ice.  Without spoilers – I will just say I didn’t feel connected with what she was going through, and this could be because I have seen this happen first hand and the author did not pull me into what she was going through, which is hard to explain without exposing said “Bombshell”.  There could have been a lot less pages about the pushing away of Noah and more development spent on what she was going through as a woman during her battle – Not to say I wanted to read more misery – I just felt it was added at 75% as a “what the hell, why not?”  – And BAM over…it was so fast. . It took forever to get to the “twist” and then we are brought straight to “The end”

I did laugh a lot at the beginning about how she got her nickname “Tweet” The parts about her childhood were hilarious, this was only for a few pages – then we begin our long stay at camp angst fest – where I spent my time wanting to throat chop a fictional character.

Goodreads is chock filled with 5 star reviews, and I am glad so many people loved it and connected with it – It just wasn’t for me.

I’ve been unsure about many things in my life except for one thing, that I have always loved him. Every single minute of every single day that I have been on this earth, my heart has belonged to him. It has never been a question, never a doubt. The love had taken on many different forms over the years, but it had always been a constant.

Everyone has their definition of love. There have been countless songs sung about it. A gazillion books, articles, and poems written about it. There are experts on love who will tell you how to get it, keep it, and get over it.

We’re led to believe love is complicated. It’s not the love that’s complicated. It’s all the crap that we attach to it and put in front of it that makes it difficult. If you’re smart, you’ll realize this before it’s too late and simplify.

Amanda Kelly spent her entire life trying to control every aspect of it, while striving for perfection. Her obsession with being perfect, along with her feelings of worthlessness, consumed her. The one thing she thought was perfect in her life was the bond she shared with her best friend, Noah.

Everything was going according to her life plan until she woke up one day and realized she had fallen in love with him. The one thing she couldn’t control was the affect he had on her. Noah had the power to give her one hundred lifetimes of happiness, which also gave him the power to completely devastate her. He was the one thing in her life that was perfect, but she couldn’t allow herself to have him.

Her life begins to unravel. Events take over and force her to let go of her dreams and desires. She needs to realize that a person cannot control the events in their life, only their reaction to them…but will it be too late for her to save her relationship with her best friend?

Present Perfect is a story of how past events have present consequences and how perfect your present could be if you stopped fighting and just allowed it to happen.

So there you go. My first guest review. Have you read Present Perfect? Would you like to add your thoughts? Chime in here! I have a small giveaway to a random commenter.