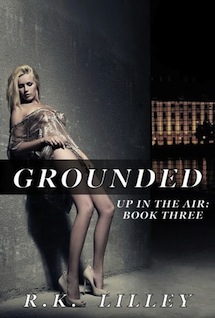 “You’re in the mood to get fucked against a wall tonight, aren’t you?”

Grounded, the third and final book in the Up In The Air series by RK Lilley (see the reading order here, it MUST be read in order) was one of my most anticipated books of the year for me. You should have seen me jumping around and squealing when I got it. Thank goodness it MORE THAN lived up to the anticipation! In fact, this was my favorite of the series. Before reading Grounded (sent to me by R.K. — THANK YOU!) I decided to re-read Mile High, the second in the series, so I could get immersed back into the storyline. I’m so glad I did, in fact, I wish I started again from the beginning, this was one trilogy I have NO problem re-reading multiple times. My only problem was it took me a while because I couldn’t keep my hands off my husband…

Grounded began right where Mile High ended, and I fell even harder for James in this book, in fact, he may be my top Dom. He NEVER wavered, NEVER had doubts about his feelings, and was honest and up-front from the start. Actually, I fell for all of the characters more than ever, especially the swoonworthy Stephan and his love, Javier. (Could Stephan be a more perfect BFF?)

To refresh your memory without too much spoilers, Bianca just found out some news about her father’s wife, and is now under very strong surveillance. She knows she is in danger and is not being stupid and sneaking away (much) like most characters do in this situation. The couple has not yet said those three magic words to each other but it’s clear as day anyway.

“Have I told you today how happy you make me? I can never go back from this Bianca. It would break me to let you go. You know that, right?” Had he read my mind?

“You’re my favorite subject, Love. I’ll start with your eyes. I fell in love with those first. One look was like a punch to the gut. You have these ageless eyes on such a young face. I just knew that you had seen bad things, lived bad things, and from the start, I knew that you could understand pain. Understand loneliness and despair. Understand feeling hopeless and helpless and alone. I fell in love with your eyes first because I looked into their depths and saw the other half of my soul.”

James….wow, what can I say about James? Totally to-die-for gorgeous, he even does some modeling in this book. Completely over the top loving and caring. Totally stern, dominating and deliciously kinky. But it is the absolute love and devotion he has for Bianca, that he never hides or fights, that makes him so amazing. OK, who am I kidding…the totally fuckhot sex EVERYWHERE, ALL THE TIME is pretty amazing too. But not so much that there wasn’t a story.

“James had shown me a profound tenderness and love that belonged only to me, from our very first time together…. it was more precious of a gift than I’d allowed myself to see. He was my Dom, and I was his sub, but our love had turned it into so much more…”

We were so lucky, that in this book we were able to see a little of James and Stephan’s point of view, and we also got to know some of the great side characters more, plus newcomer, the gorgeous Tristan, who needs his own book, and Lana who is getting one! YAY!

This is absolutely one of my favorite series.  I lot of authors tried to capture the feeling that Fifty Shades gave, but RK Lilley, with the Up In The Air series, took that feeling and expanded on it. It was romantic, hot and sexy, loving, funny, tragic, scary, and completely delicious the whole way through. None of the three books felt like they were any less than the others, like so many series that start off great when the couple is just beginning, but end up boring. In fact, this one was quite the opposite. The last was the best for me! 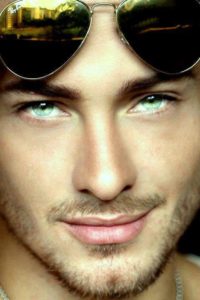 “…his eyes were paler, a paleness that pierced, as though being lighter somehow gave them substance.”

Purchase Grounded by R.K. Lilley at

***Stay Tuned!!!! James will be giving us his very own point of view here at Ana’s Attic on Wednesday February 13, and RK will also be giving out a copy of Grounded