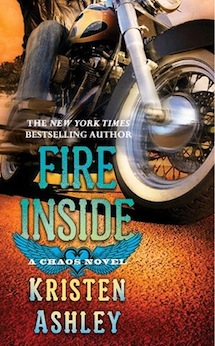 Kristen Ashley, as most of you know, is a goddess to me. I love her books. They are like crack. I have said a few times that she needs her own rating scale. All of her books are in the 5 star range, but some are 10 stars and some are barely 5 stars. So I have to rate her books compared to only her own books. Fire Inside is a book that NEEDS to be read after Motorcycle Man and Own The Wind. Yet Motorcycle Man really needs to be read in it’s proper place after the rest of the Dream Man Series, which should ultimately be read after the Rock Chick Series! (whew!) All the characters cross over. At the very least, read Motorcycle Man and Own the Wind first.

We first meet Lanie and Hop in Motorcycle Man. Lanie was a hot mess who stuck by her asshole, loser fiancé despite him getting her involved in some major danger and getting her BFF stabbed multiple times. Hop was in Motorcycle Man as well, and let’s just say, he did NOT make a good impression on me. But almost 8 years have gone by. Lanie still can’t get over her guilt about what she let happen to Tyra because of the bad mistake she made of staying with Elliot.

It has been a long time (8 years) since she had a man in her bed. Lanie decides Hopper, who is now single, is the guy to get her back in the saddle. She always thought he was hot, but was hurting too much to do anything, until the opportunity arose…

“Wanna fuck?”
At her question, his gaze sliced back to hers as he felt his body jerk in shock.
“Say again?” he asked.
She leaned in slightly, never looking away and repeated, “Wanna fuck?”(…)
“You had one too many, babe?”
“No.”

“Not sure that’s a good idea, Lanie,” he told her(…)
She threw out a hand and declared casually, “It won’t get complicated.”
Okay, maybe she was messed up, fucked up, a drama queen, high maintenance and a nut.
“Bullshit,” he replied. “It always get complicated.”

But after the “just one night” that Lanie wanted, it was too late, Hop was sucked in.

Right away, this book is different. There is no build-up to the hot sex, the good stuff comes first…the rest comes later (haha…see what I did there?). Lanie runs her own successful advertising agency and grew up in the Connecticut country club lifestyle. Though she hangs around Chaos, and feels that Chaos is her family, she is still pure class to them, and she has not changed.

“Suck me off in bed. Not on your knees. Class doesn’t hit her knees.”

Hopper has never had a “lady” in his bed, so his nickname for Lanie was “lady”. While I loved the sentiment behind it, it struck me as a little derogatory most of the time. It wasn’t a deal breaker for me, but I just felt kind of weird about that. That being said, we have seen this in other KA books, with “daddy” and “buddy”, I think of the three, Lady works best.

Lanie won’t let him in, won’t let him get close, though you know she wants to. She just has too much baggage, not just from her past with Elliot but growing up with an asshole cheating father and an alcoholic mother.

Fire Inside was a quieter-type book from Kristen. More family and relationship building, a slower, more gradual build-up, and no big dramatic scene. But the patented KA style was there. There were a TON of quotes I highlighted, maybe even more than usual. Hopper really turned himself around. He turned himself into a really awesome hero, and knowing what Lanie had been through, he wanted to make sure he ALWAYS had her back. And he did.

“I don’t use you as a shield. I am the goddamn shield.”

“At your back, baby, now and always.”

There were a lot of breaking-ups, misunderstandings and mean words thrown. I wanted to kick Lanie’s ass a few times, then Hopper’s. But these guys were good together, if they could just get over themselves a bit.

Fire Inside took place at the same time as Own the Wind. So it is not a continuation where you get to see the couple from the previous book a little later. Also, very little took place at Chaos. This was a very intimate book. It was about Hop and Lanie, and not much else. Lanie has been through her tragedy, has got to have PTSD, she couldn’t handle another incident, so I’m kind of relieved Kristen didn’t feel the need to go there. It was about moving on, acceptance, family, love and healing.

“Don’t regret what you did. Don’t regret the decisions you made. You did right. You followed your heart and that is never wrong, darlin’. But shit went down and it was extreme. That’s over, Lanie. Long over. Move on.”

This is a 4.25 on the Kristen Ashley scale. I think if it were a different author, I may have rated it higher. I LOVE her writing, I really loved this book, but it wasn’t my favorite. Hop said some things….Lanie did some things, I just wasn’t head over heels in love with either character, and I missed the bigger side-stories that usually take place. But I still gobbled it up, read it in one day, highlighted half the book and swooned my ass off. As I said above, this book was a more intimate book about healing and moving on.

“Every step, every breath, every second I lived on this earth, I’m thankful for, no matter how fucked up or whacked or hard or good, ’cause all that shit led me to you.”
–Hop

Ultimate Prize Winner to include:

2nd Place – Signed copies of Own the Wind and Fire Inside

4th place – ecopy of Fire Inside

5th place – ecopy of Fire Inside