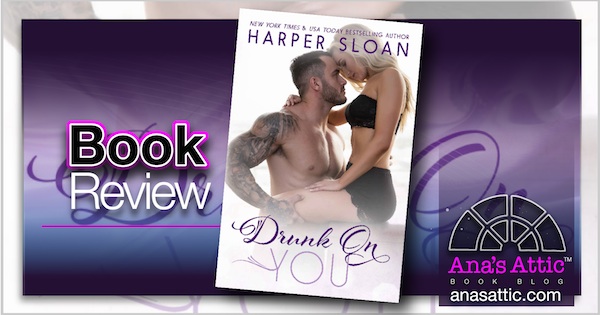 Drunk on You (Hope Town 4) by Harper Sloan

I love Harper Sloan’s books, but my stand-out favorites are the Hope Town Series. Drunk On You may be the hottest one yet! But it’s been a long time since the last came out, and although I loved the books, my memory sucks, so I can’t say I remembered much of these particular side characters from previous books. It didn’t matter, I think this could have stood alone OK, but would be better if you at least read When I’m With You first. Nate and Ember from that book are featured very strongly in Drunk on You.

Nate and Shane own the hottest club in Atlanta. Both former strippers, the club features them and other hot guys dancing on the bar every night. Shane has been broken up with his cheating girlfriend for a year, but she wants him back, despite her being a jealous bitch when he does his job and dances for other women. Nikki is Ember’s best friend. She has been broken up with her cheating boyfriend for a year also, and he is stalking her, which can be really bad for the second grade teacher and her morality clause.

But when visiting the club one night and drooling over Shane, Nikki has an idea.

“You want to play, Nicole, make sure you understand what you’re asking for.”

They’ve both been attracted to each other for a long time, but never made a move because each thought the other was taken because the exes were always around. But pretending to be in a relationship might just get rid of the stalky exes for good, plus, they both know the sex would be so hot together.

“Think real hard about taking this, Nicole. If you put your number in there, you’re as good as mine for however long we decide to … handle each other. I’m not the kind of man you want to be playing games with.”

Shane has decided that women can’t deal with his job, so he refuses to even think about getting attached to someone and then have them leave him out of jealousy.

“Don’t fall for me, Nikki–it will only end badly.”
“Maybe you should be worried about falling for me, Shane.”

Nikki was feisty and confident. She loved watching him dance, and it turned her on knowing that every woman wanted him, but she got to go home with him.

It’s been a while since I read a book with a Dominant man in it and I forgot how much I love reading about that kind of sex! Holy “Hot Hunnam on a stick” I almost combusted.

“But when I’m in the mood to play, I’m the master of your every move; you will obey me or you will be punished.”

Wait a minute…I am saying it was H-O-T!

“Don’t keep your sounds from me.” I lift my hand and smack her pussy. The wetness making the contact louder as it echoes around us.

But I never felt that full-on Dom feeling that I get from other books where usually the guy is really closed off and detached. And I liked that. I liked that he seemed real, just controlling in the bedroom.

And holy sex-on-a-stick, the guy whispers french in her ear! 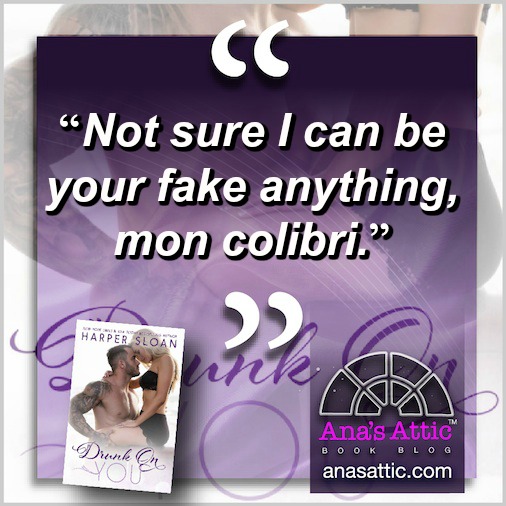 I got right into Drunk on You and it totally hooked me. I will say, that this one was a little more sex than emotion for me. I don’t mind that, but with the first three, I think I cried and hugged my kindle at the end. This one didn’t bring me that level of feels, but I still loved it start to finish.

“Is this when you tell me not to fall in love with you?”
“No. This is when I tell you I’m going to make you do just that.”

Sidetone- this cracked me up:

“Will you beat me like Christian?”
My head jerks back. What the fuck? “Who the fuck is Christian?”
Her cheeks flush. “From the book … well, you probably would know the movie over the book because you don’t strike me as a romance novel reader. Fifty Shades of Grey. Christian is from that series. He … uh, well … I think so at least, is like you.”
“I don’t get the reference, but no, I won’t beat you.”

Mmmmmm….Shane, that sexy little control freak. Not only can he dance sexier than Magic Mike, he is also a Dom in the bedroom! There are some super hot scenes in Drunk on You and I loved the feisty, confident heroine, Nikki as well. I picked this up when I couldn’t focus on reading because a hurricane was headed our way. But when I started Drunk on You, I tuned out the weather and got lost in the story. Drunk on You is the hottest in the Hope Town Series, but it may have sacrificed story for some of that heat because it didn’t quite bring out the emotions that the previous 3 in the series did.

Purchase Drunk On You by Harper Sloan

The first three are also available as a bundle with bonus content: 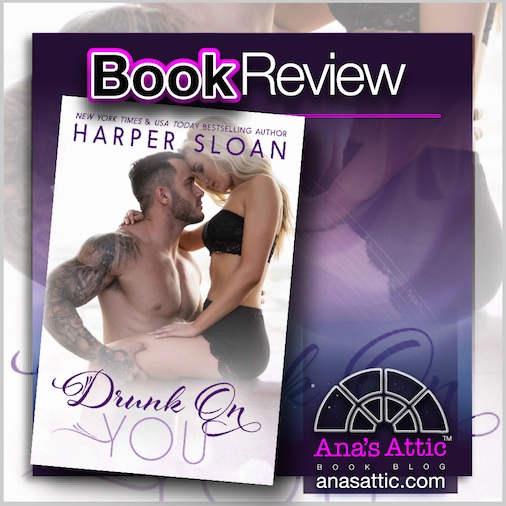