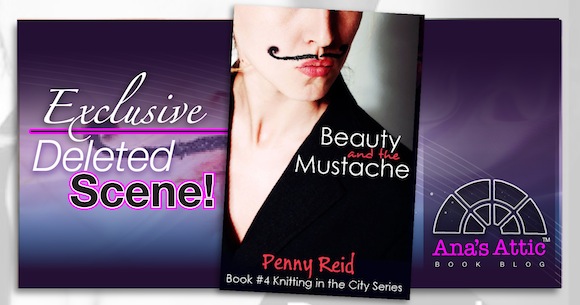 I am just starting this book from Penny Reid. I have read so many AMAZEBALLS things about it, I had to read it! Plus…Penny has kind of a thing for me. Seriously. She luuuurves me! (And I’m a little scared of her.) 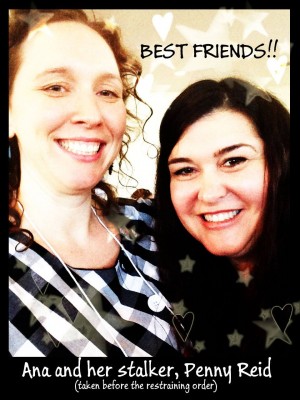 So she has this series…Knitting in the City. And it’s really funny, but not in the 12 year old boy humor way, but in a biochemist smart way.  In fact, Penny is a biochemist or some shit like that that smart people do. But it is such a refreshing change! I have only had a chance to read the first in the series, but I have been hearing so much about Beauty and the Mustache that I had to read it! Penny says it stands alone, so I am starting right when I finish this post.

This is a full-length novel, can be read as a standalone, and is the fourth book in the ‘Knitting in the City’ series. There are three things you need to know about Ashley Winston: 1) She has six brothers and they all have beards, 2) She is a reader, and 3) She knows how to knit. Former beauty queen, Ashley Winston’s preferred coping strategy is escapism. She escaped her Tennessee small town, loathsome father, and six brothers eight years ago. Now she escapes life daily via her Amazon kindle one-click addiction. However, when a family tragedy forces her to return home, Ashley can’t escape the notice of Drew Runous— local Game Warden, bear wrestler, philosopher, and everyone’s favorite guy. Drew’s irksome philosophizing in particular makes Ashley want to run for the skyscrapers, especially since he can’t seem to keep his exasperating opinions— or his soulful poetry, steadfast support, and delightful hands— to himself. Pretty soon the girl who wanted nothing more than the escape of the big city finds she’s lost her heart in small town Tennessee.

This is a DELETED scene!

I wrote this scene early, early, early on. It was one of the first scenes I wrote for the book. However, as the rest of the writing progressed I realized it didn’t really fit. The original plan was to have everyone force Ashley out of the house by taking her to a bar. Drew would be there, he’d get weirdly jealous about her dancing with another guy, and they would argue; this scene would ensue at the bar. Instead, I decided to wake her up from her funk by having the bear/raccoon scene and this exchange had to go.

“Why do I need a guy? I get everything I need from my friend that plugs into a wall.”

This statement appeared to stun him. Good. He was an ass.

“That’s not a replacement for a man.”

Drew gritted his teeth, tapped them together, slid them side to side as his eyes narrowed. I imagined he felt his glare was menacing, challenging. I was not impressed.

I snorted. Rolled my eyes. This was a dumb conversation. I felt a flare of aggravation and, once again, my neck itched. He was incredibly irritating.

“Oh my god, can we stop talking about this?”

“Shut up, Billy” Drew and I said in unison, our eyes locked. Neither of us glanced at my older brother.

“Maybe you need to try a different guy.” Drew crossed his arms over his chest, stepped forward, inserting himself within my sphere. Less than a foot separated our bodies. I’m sure he thought he was seductive. Much to my aggravation, he was seductive. But he was also a Nietzsche loving redneck.

I shook my head. “See, that’s the problem. Men are inconsistent and I’m not willing to hold orgasm auditions. I’d rather just go with what I know gets the job done.”

He shook his head, slowly at first, then more adamantly. “That’s bull.”

He ignored my question, his expression turning intent. “I want you to prove it.”

Exasperated, I let my hands fall against my thighs with a loud smack. “Well, how am I supposed to prove it? Do you want to watch me? Will that satisfy your scientific curiosity?”

I frowned, squinted my left eye, peered at him. “You’re joking.”

“Well, you can forget about it.”

“Why? Because I don’t want you to watch me flicking through my furry purse? You’re a weirdo freak. I’m not doing that. This is why I don’t date.”

“I’ll play a game of darts for it. Whoever wins gets to watch the other person.”

I swallowed, then lied. “I don’t want to watch you.”

“Then pick something else, anything else.”

“Fine. Okay. If you win—which you will not—then you can watch me do my business with my magic wand. If I win, then you have to clean the area up around the house, haul away all that garbage.”

Before I knew quite what was happening, we shook on it. 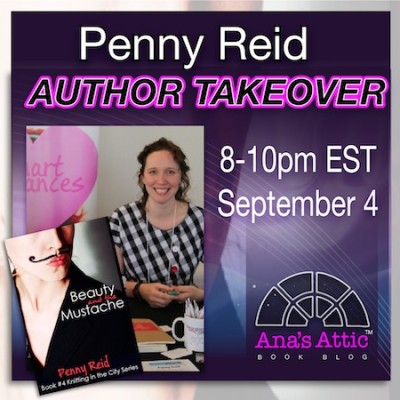