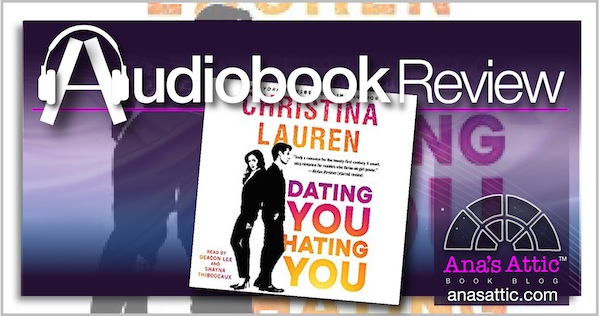 Dating You Hating You by Christina Lauren

I love an enemies to lovers romance, so I grabbed Dating You Hating You by Christina Lauren just from the title and author(s) alone. And though this wasn’t really enemies to lovers, the title kind of worked. Though to me, I felt like this leaned a little more on the chick-lit side rather than romance, even though there is a romance.

Evie (Evelyn) is a successful, driven, hard-working Hollywood talent agent who is married to her job. She meets Carter, an agent at another agency, at a costume party when they are both dressed as Harry Potter characters.

“I’m notoriously married to my job.”
“That’s super convenient because so am I. It’ll be like we’re cheating on our jobs with each other.” He says this as if he’s just discovered some brilliant loophole.

They hit it off really well until their companies merged and it turns out they are competing for the same job. Evie has been there for 5 years, and has done very well, but her boss is a sexist pig, and even though Carter has way less experience, her boss has a ‘good ol’ boys’ attitude.

“There is an unspoken pecking order in agenting, defined primarily by who brings in the most publicity and money — and this year, that is likely to be me.
But there are other factors, too. Such as: having a penis. Apparently that’s a big one.”

This story was very centered on the workplace, the competition between them, and them playing crazy pranks on each other. It was smart, fun and very well-written. There was definitely a sexy attraction between the couple that they kind of tried to fight throughout the book.

“Screw him and his perfect forearms and cute crooked smile and diva brother.  I’m so tired of wanting to shove him into the wall and then shove my hand down his pants.”

Dating You, Hating You was, to me, more about the office gender inequities and office politics than it was about the romance. I loved reading a story that addressed this, but I never really felt the true and absolute love between the couple, and despite liking Carter, he wasn’t my ultimate alpha hero by any means.

“Simply put, Evelyn Abbey is my former almost-girlfriend-turned-archnemesis-turned-tentative-ally whom I would now very much like to permanently seduce.”

I enjoyed the narration very much, it was great to not have the same narrator as every other book. The narration added to the story for me.

Dating You, Hating You by Christina Lauren was a very well-written and well-paced workplace romance. It was a fun and different read, and definitely centered more on the workplace than on the romance. I loved how sexism in the workplace was such a large part of the story, and I was entertained and interested throughout. I just didn’t fall in love with him or her. I enjoyed the book thoroughly, but I never felt the all-encompassing love between the couple. Yes, they were perfect for each other and had chemistry, but I never really felt them fall in that all-consuming way. I would say this straddles the line between romance and chick-lit for me.

Purchase Dating You Hating You by Christina Lauren 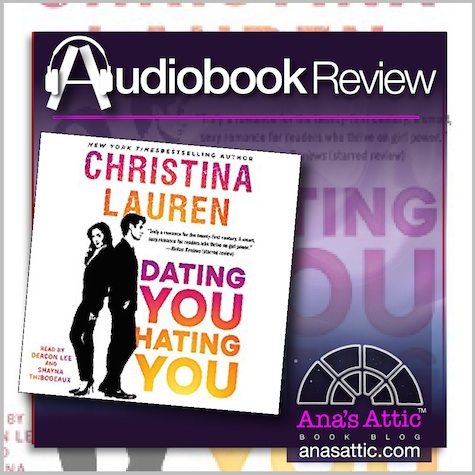