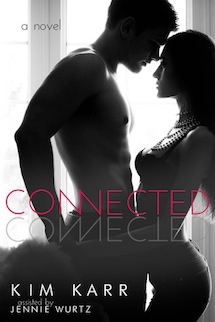 What if once in a lifetime could happen twice?

I usually know very little about a book when I read it. I read a quick blurb about Connected by Kim Karr and I saw Rock Star and HOT, and well…duh. I’m there. I very rarely read teasers, and I don’t read reviews before I buy a book, and this book was no exception. So I really had no clue what I was gonna get. I love it that way.

Dahlia London has been with her boyfriend Ben forever, and she loves him like crazy. But one night, during college, she was out with her friend and she heard an amazing singer, but couldn’t see who it was. Then between sets:

Something… no everything about him drew my attention…

“When our eyes connected it felt like minutes, in reality it was mere seconds. At that moment, something happened inside of me. The connection was like nothing I’d ever felt before. It was an electric pull that willed me in and forced me to keep looking at him.

Everything I saw and everything I felt translated into three little words–he is dangerous.

When Dahlia and River began talking, and flirting, the intense connection between them was clear.

Could love at first sight even exist when you were already in love with someone else?”

She told him she would wait as he went back on stage. But she left.

“I knew I had to leave, or I would end up doing something that I would regret. I had to leave for two reasons. First, I loved Ben, and second, Ben would fucking kill River just for looking at me the way he did.”

Three years later, we see Dahl and Ben together, with a few flashbacks thrown in that are worth paying attention to. But tragedy strikes and Dahlia is left a complete shell of herself for two years. An empty husk, barely getting through life. As she begins to heal a little bit, her friend best friend Aerie asks her to go back to her photo styling career and meet with River Wilde, the lead singer for The Wild Ones. Yes…that River. (Insert opinion here: really cool but cheesy name).

“I remember the feelings I felt then, feelings I have long since buried. I hope to God they don’t resurrect tomorrow. How could they? Those were feelings of a young college girl who was in love with someone else anyway.”

Though they both pretend to not remember, yet the instantaneous connection is there again. You feel it immediately.

“As he pushes aside a piece of my hair, tucking it behind my ear, he seductively whispers, “Dahlia, I want you. I want to kiss you, touch you, make you come over and over again. I’ve never wanted anyone as much as I want you.”

One thing about River…he is not shy. He does not play games.

“I haven’t been able to stop thinking about you for five years.”

He tells her how beautiful and perfect she is…often (for me, it was a little too often) but he was still totally swoonworthy.

And the sex….mmmmm…the sex, yeah, there was some good sex. Let me tell you this, I never realized how hot it is to brush your teeth!

I honestly thought this was a nice not very angsty rock star/soul mate book. In fact, at one point, I admit I found myself floundering a bit as the sweet couple got to know each other.

“I feel like fate has brought us together again. I also believe that one night, so long ago, just wasn’t the right time for us. But tonight is.”

Then I watched the amazing fan-made teaser. Damn. This is why I usually don’t read reviews or even watch spoilers. There was something in there that made me know something else would happen….so I was scared to read on, yet I suddenly couldn’t stop. I started having some thoughts that were out of left field that as I wrapped up the book I figured they would remain unaddressed. Then BAM–the fucking epilogue. Seriously? SERIOUSLY?????

Holy fuck, I need the next one, like yesterday.

***Update from the author, there has been more editing done and it will be uploaded to Amazon very soon! Good news! That would raise my review to a 4.5 stars.

I going to be honest here. I just came off reading another amazeballs book with the first third -half of the book having a very similar storyline. Though the similarities ended, I think that may be part of the reason I can’t go to a higher rating here. I really enjoyed Connected. I did. That being said, I had some issues with it dragging in the middle and too much of River’s gushing about how beautiful and perfect Dahlia was.

There is more to this book title than meets the eye. There are some other connections as well woven lightly throughout the story. But the connection between River and Dahlia was so freaking strong, you just know these guys are soul mates. Connected tugged at my heartstrings, made me tear up, made me fall in love, made me fan myself, and made me want more! There is no question about it, I will grab the next book, Torn, when it comes out in the fall.

“I never imagined I could feel so connected to anyone as much as I feel connected to you. I knew I loved you from the moment I saw you. How could I not? Loving you is as easy as breathing.”

Torn, the second in this book duet comes out in the fall of 2013. The story of River and Dahlia will end with Torn, but four novellas will be released featuring side characters from the series. Kim Karr has also agreed to give me a sneak peek at Torn for her stop here today:

** TEASER from TORN **
(spoiler alert if you have not read Connected)

Kim Karr has also been gracious enough to supply Ana’s Attic with 1 e-book and 1 signed paperback to give away to you guys!