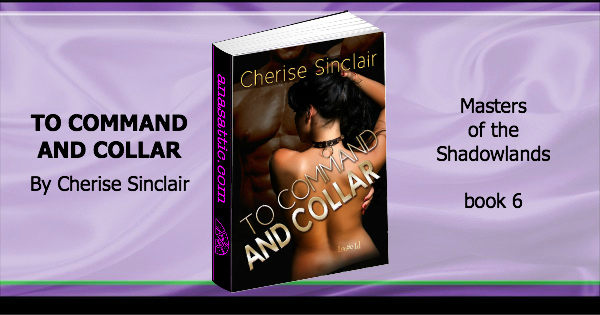 Then I remembered why I didn’t read further. This one was darker, scarier, and intense. It was definitely not a book to read just for the sexy stuff. This book deals with human trafficking, a real and horrible thing that actually goes on around the world. It was well written, as all of Cherise’s books are, but it wasn’t what I was looking for at the time. Following the set-up of Make Me, Sir, The Shadowlands Masters are working with the FBI to take down a sex slave operation.

Master Raoul gets himself invited to a small sex slave auction. His instructions from the FBI are to not make any purchase, so he will be invited back for another auction. But he recognizes Kimberly, a kidnapped friend of one of the subs at Shadowlands. She is broken and scarred, after stabbing her previous owner, and him stabbing her. Raoul has to be a tough as he ‘tries the merchandise’, as hard as it is for him.

As he regarded her, he massaged her upper arms, his grip powerful, controlled…warm. “I am going to restrain you and flog you. I will use my hands on you, perhaps my mouth. I know you don’t have a choice in this” –his eyes chilled for a moment–“but you might find it easier, knowing I wont exceed those boundaries.”

She doesn’t understand why he is showing her kindness. The men are there to only hurt the women, but she can see he is different, and has to keep reminding herself he is a slaver. Raoul couldn’t just leave her there, so he risked the operation and bought Kimberly and brought her home.

The problem? The overseers watch the slave, and they come and do an in-home follow up visit a month later. So the broken and battered Kim had a choice: go into Witness Protection and never see her mom again, or really train to be Raoul’s slave and help the operation. She wants the women she was tortured and caged with freed, so she agrees to help out.

Raoul is a serious master who expects and wants a full time submissive in his life. Kimberly is broken, and can probably never willingly serve again, even though she was lightly in the scene before being kidnapped. There was a definite pull between the two of them. But Kim was just too broken.

And here is where my problem lies. This woman was a slave for 7 weeks. Went through unimaginable tortures. And now she is expected to live 24/7 as a slave immediately after rescue? Really? I think Master Raoul can work with her and train her for the visit without actually making her live it 24/7.

Kim was definitely submissive, and having a Dom to take care of her and give her some commands was a comfort to her. As they lived together as master/slave, they couldn’t help but fall for each other. But Master Raoul wanted a submissive in his life, and Kim wasn’t sure she could live like that.

“You require more than bedroom domination. Serving a master fills a need in you as great as the need to be dominated to truly enjoy sex.”
“Now use your tongue on my thumb the way you would on my cock.”

The Masters of the Shadowlands series has changed so much from the beginning and from her other series, Mountain Masters. I loved it when it was at the club with willing submissives. But as it gets into the slavery end of things, as well written as it is, it’s just not what I consider an enjoyable read. It was a difficult read, and that’s why the rating is hard for this book. Cherise can WRITE, and I love the way she educates as she does. But the subject, and how the aftermath was handled just wasn’t for me. I loved Raoul, and I saw the love they developed and the attachment, I understood that Kimberly is a natural submissive. But I thought the way she was forced to face her fears right after the hell she went through for 7 weeks was insane.

Had I been in the mood for a darker, more disturbing read, I think I would have rated this higher. Also, though there are some super hot sex scenes, they didn’t occur until later in the book. It’s my own fault for not reading the synopsis. So even trying to take that out of the equation, I’m still bothered by the way she was pushed so hard after her rescue. Now my issue is whether to continue or not. Master Sam’s story will be with a rescued slave as well.

Can’t we go back to simpler times when the subs are normal, imperfect girls who just realized they are submissive when they find the right master?

Each book in the series has it’s own story with a beginning, middle and end, and features a different couple, but I recommend you read in order for continuity. There are some larger, ongoing story lines, like the slavery ring that carry through the series, but there are no cliffhangers, just single Doms that you can’t wait to see paired off.

The first book, CLUB SHADOWLANDS is currently FREE and it’s a 5 star read.

.
See the rest of the Masters of the Shadowlands Series Here
.

Purchase to Command and Collar by Cherise Sinclair