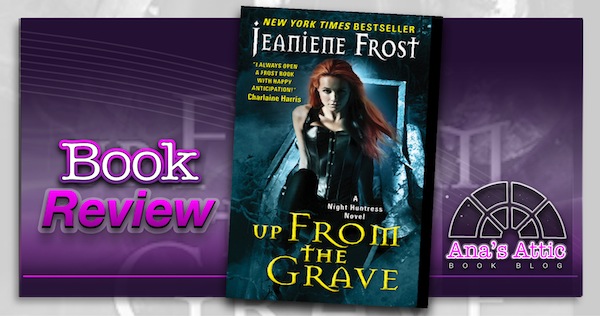 Up From The Grave (Night Huntress 7) by Jeaniene Frost

Cat and Bones. My favorite paranormal couple ever. I’m so sad it’s over, yet I’m happy that it was a good ending to an amazing series. The Night Huntress Series is my favorite paranormal series (followed closely by Black Dagger Brotherhood). And Cat and Bones have a love that you never doubt. Up From the Grave was a non-stop roller coaster of action and adventure with Cat and Bones’ love shining through it all.

Jeaniene brought back all of the major players (though I wish we had more of Cat’s mom) in this race to save the vampires and ghouls before the whole supernatural race is at war. There were twists and turns that I didn’t really expect, and there were a lot of the trademark fun and snarky lines.

“Shame on you, Crispin. Married how long, and you haven’t spanked your wife with a metal spatula yet?”
I’d gotten used to Ian’s assumption that everyone was as perverted as he was, so I didn’t miss a beat.
“We prefer blender beaters for our kitchen utensil kink,” I said with a straight face.

Cat and Bones are living a relatively calm life, when they get word from Don (who is a ghost) that Tate, Juan, Dave and Cooper are missing. Cat knows that Madigan is behind it, and she and Bones are going to figure it out.

“That’s how two vampires, a medium, and a dog came to sit around a Ouija board in the back room of a floral shop.”

With a visit to NOLA and some “help” from Marie, Cat and Bones and friends set out to rescue the team, and possibly save the Supernatural world from out and out war. Madigan is more evil than we ever new, and I kind of felt like I was re-reading Jurassic Park a few times.

“We were never properly introduced,” I said in a vicious purr. “I’m the Red Reaper, and you’re dead.”

Oh, how I hope we get an Ian book, I’d love to see the kind of woman who can land the manwhore.

“Ian, I’m not going to hug you,” I stated as I approached him. “I know you like this better.”
With that, I slapped him hard enough to rock his head to the side. When he’d straightened, he flashed me a wicked grin.
“Finally, you give me what I want. Knew you loved me, Reaper.”

I don’t want to give away too much of this story. You need to read it yourself. I have some mixed feelings about where the storyline went and the fact that it was kind of rushed quickly at the end, but I’m hoping we may somehow see more of this family.

Bones did something in this book that really pissed me off, and the fact that let Cat get to her again kind of upset me…been there, done that. They both need to trust more.

“I can live with your anger, your retribution–bloody hell, despise me if you must, but don’t expect me to behave as though you aren’t the most important thing in my life. You are, and I will let no one, yourself included, bring you to harm.”

There is no mistaking Cat and Bones love. I just wish I saw them together more. While it was great to see every previous character, it’s Cat and Bones that I read this series for, and more of just them would have been very welcome.

“In my thirty years on this earth, I’d already seen and done more than many people would in a lifetime, but I wouldn’t have made it this far if not for love. That had been the solid ground beneath my feet when everything else around me had crumpled, and despite the danger and uncertainty of what lay ahead, I knew it would be again.”

If I were to rate the Night Huntress Series by Jeaniene Frost, it would be 5+++ stars, hands down. I must say, I loved this final book, a lot more than I loved the last 3 spin-off books. And I love that we revisited all of the characters, and there was good closure to the storyline. I just wish there was more of my favorite couple being just that, a couple. Still, Jeaniene did a great job wrapping up the series. I hope we revisit again through Ian.

“Everyone… we’ll see you again, some soon, some later, but as vampires say, until again.”

Purchase Up From the Grave by Jeaniene Frost

This is the series order for the full novels in the Night Huntress Series. Jeaniene Frost has published a lot of novellas and spin off novels as well. See the whole series order here.