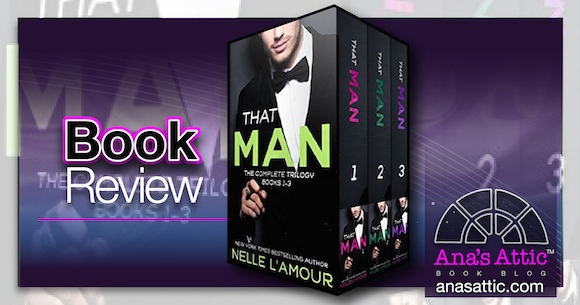 That Man Trilogy by Nelle L’Amour

That Man series by Nelle L’Amour was a sexy and fun read, and my favorite part about it is some of it took place in our book world, often mentioning my favorite books or authors.

“The waiting area of his office was for sure a reflection of his penis— I mean, Prius. Small, compact, and energy efficient since it seemed to have the barest amount of air conditioning allowed by human labor laws. An oppressive cheapskate.”

At her engagement celebration (without Mr. Excitement) she plays a little Truth or Dare with her friends, and ends up having to kiss a stranger blindfolded. Holy smokes, what a kiss it was! Jennifer was never kissed like that and she couldn’t stop thinking about it and wondering about the guy she never fully saw.

Blake Burns can’t stop thinking about the beautiful girl who was blindfolded and kissed him at the bar. It is borderline obsession, and he could kick himself for not getting her number, or even her name.  Blake was a total player, and as head of SIN TV, the adult portion of his father’s media conglomerate, he could pretty much get any girl he wanted, yet this one was stuck in his head.

But when the star of his fantasies walks into his office as a new hire, Blake is determined to make Jennifer his. Fiance or not. Commence “Operation Dickwick”, which is Blake’s way of eliminating the competition.

Blake’s Jewish grandmother was my favorite character. She reminded me so much of my own.

“Dentist shmentis. Bubala, with your looks, you could do a lot better. Get yourself a nice rich man with a big shmekel like that Christian Grey— or my grandson.”

“Of course, Fifty Shades of Grey was mentioned, but so were so many others— Arianne Richmonde’s The Pearl Trilogy, CD Reiss’s Songs of Submission, and R.K. Lilley’s Up in the Air series to name a few. There seemed to be no end to the list of books and authors these voracious readers devoured.”

And in a focus group the readers loved their book boyfriends!

The first two books in the series were tons of fun, sexy and fast moving. But then book three almost seemed to be written by a different person. It was much longer than the first two and lost most of the lighthearted, fun feel. It felt like it dragged on forever, like it was fluffed up to make it full length. 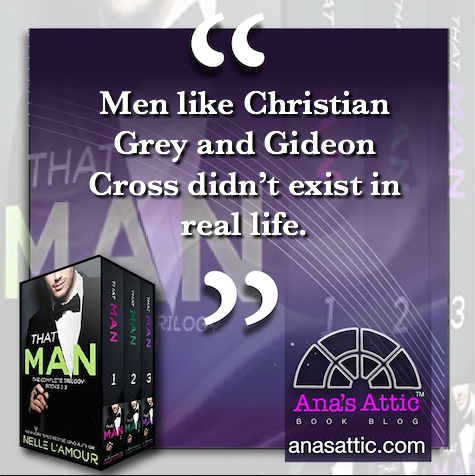 The That Man Series by Nelle L’Amour started out really great to me. Fast moving, sexy and funny, I couldn’t get enough. Bringing in our world of book signings and erotic romances made it so much more fun because it’s like recognizing your friends in books. But the third book in the series really dragged for me and lost a lot of humor of the first 2. The first two would be 4.25 stars. The last would be 3.25 stars. As a series, I will stick with 3.75. I did buy Gloria’s Secret which is about another couple in the book, so I look forward to reading more by Miss L’Amour. 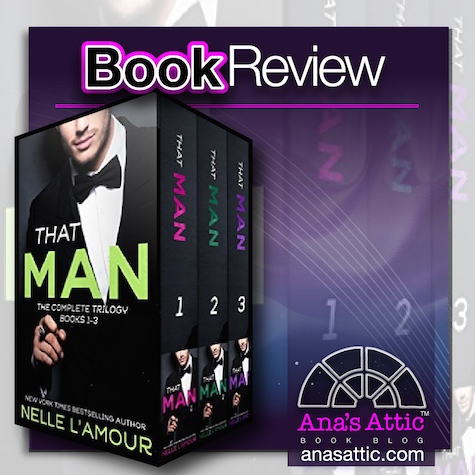