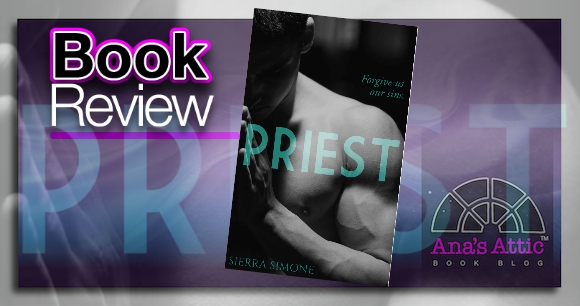 Priest by Sierra Simone is as taboo as I have read. It also had some amazing sexual tension. Priest is hot and so very dirty. I’m going to give a warning here: If you are a religious person, especially a Catholic, I don’t recommend this book. Since I am neither, none of that bothered me…in fact, I’d convert if I could find my own Father Bell!

Father Bell didn’t always want to be a Priest. He had been with woman before. But when tragedy struck his family and his town, he was drawn to the Priesthood, and devoted his life to his congregation. He was a good man, and a pillar in the community. Until SHE walked into his confessional, and they were pulled together like magnets.

Told mostly from Father Bell’s point of view, we are able to see he is a very sexual creature, who just wanted to do something right for his community. But I never felt he was truly what a Catholic Priest should be. They have a calling; I never felt that in him. It was more of an obligation, as much as he enjoyed the position and excelled at it.

…now it was only the thin line of my self-control that kept me from bending her over a pew and spanking that creamy white ass for making me hard when I didn’t want to be, for making me think about her naughty mouth when I should be thinking about her eternal soul.”

Holy Fuck. He was so deliciously dirty.

Poppy is actually the character I had some trouble with. I always felt suspicious of her. I never felt her motivation for going after a Priest so blatantly. I mean who goes to confession and tells every detail of a sexual fantasy to the Priest?

What straight man wouldn’t be tempted by a gorgeous woman coming in regularly and telling those types of confessions? 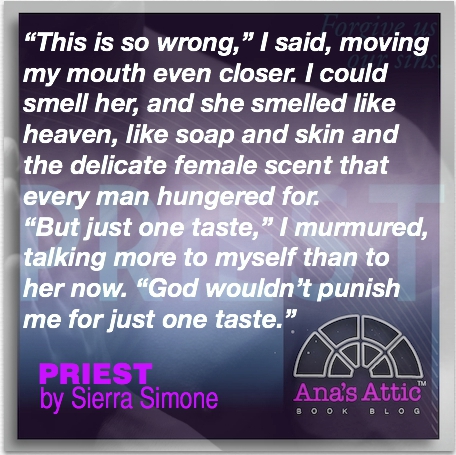 Despite what they were doing being SO WRONG, it just felt RIGHT. His love for God and religion was still as strong as ever, but he needed more, and why would God deny him the love of a good woman? I felt his struggles and his dilemmas. He went way too far at times (the altar, holy water…) but that just made it so much hotter.

The beginning, when the sexual tension was so high and nothing was really done about it yet was my favorite. I did find that the second half wasn’t quite as engaging as the first because I felt like I didn’t know or trust Poppy, and character depth for both was missing a bit. But Dayum…hot dominant sex made up for it.

Priest was so dirty and taboo, I felt like I needed to go to confession after…or maybe I just wanted to meet a Father Bell. The first half of the book was my favorite, when the sexual tension and confusion and struggles were highest. I felt it lost a little steam for me as the book went on because it was missing some character depth. I never felt like I got to know Poppy at all and was suspicious of her motives the entire book, and though we got to know Father Bell because it was told in his point of view, I would have liked to have gone a little deeper. Hee hee…I wouldn’t mind if Father Bell went deeper 😉 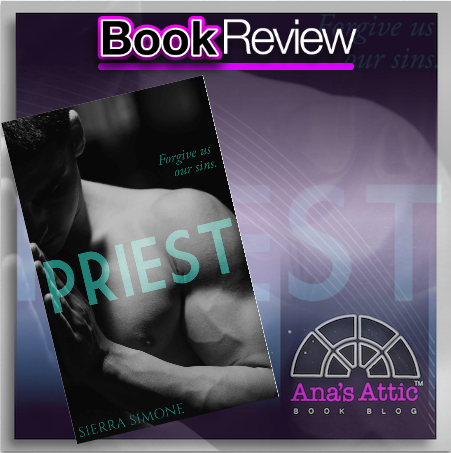