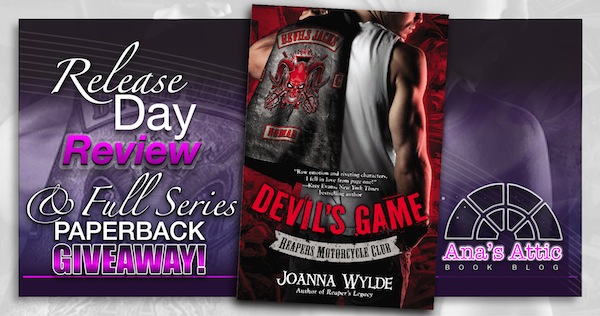 Third in the Reapers MC Series. Each can stand alone.

Liam “Hunter” Blake hates the Reapers MC. Born and raised a Devil’s Jack, he knows his duty. He’ll defend his club from their oldest enemies—the Reapers—using whatever weapons he can find. But why use force when the Reapers’ president has a daughter who’s alone and vulnerable? Hunter has wanted her from the minute he saw her, and now he has an excuse to take her.

Em has lived her entire life in the shadow of the Reapers. Her overprotective father, Picnic, is the club’s president. The last time she had a boyfriend, Picnic shot him. Now the men in her life are far more interested in keeping her daddy happy than showing her a good time. Then she meets a handsome stranger—a man who isn’t afraid to treat her like a real woman. One who isn’t afraid of her father. His name is Liam, and he’s The One.

Or so she thinks.

Devil’s Game is the third in the Reaper’s MC series by Joanna Wylde, and I couldn’t wait to get my hands on it! After all, I loved Reaper’s Property (Mmmmmm, Horse! {my review}) and I loved Reaper’s Legacy even more {my review}. Though each book can stand alone, the characters were introduced in Reaper’s Legacy, and the timelines crossed. But to be perfectly honest, I didn’t really remember any details, and never felt like I missed something.

“You deserve a man who’ll fight for you, baby girl. You remember that, all right?”

Em is by far my favorite heroine of the books. Daddy’s girl, and daughter of the MC President, Em knew how to defend herself and handle a bunch of lewd bikers. She was feisty and tough, and despite her dad’s over protectiveness, Em loved the Reapers. But there is a big problem–at 22, Em still carries her V-card. If you had a gang of bikers walk you to class your first day of high school, and your father ‘accidentally’ shoots your boyfriends, you might be a virgin too.

“Buzzzzzzzzz…” I hummed with drunken precision. “You go through a lot of batteries? I know I do. Can you make it walk across the table if you turn it on high enough?”

Em has had a crush on Painter, a Reaper’s brother for years, but he was too much of a wuss to go after what he wanted.

“This wants me. But either you’re too fucking chicken or you want more time to play around. So sorry, but you lose. Eat shit and die, Painter.”

When Em meets Liam online, she enjoyed having a guy that didn’t know who she was and where she came from. They really talked and shared a lot. So after a while, when they decided to meet in person.

“Jesus, you got good tits,” he said, not sounding quite like himself. Rougher somehow. Then he slid a hand down my back and grabbed my ass, crushing me into his hips. I think my womb clenched. Or something did. If it wasn’t my womb, I had a very confused appendix.”

But as things get a little too hot in a dirty bar, Em doesn’t want her first time in a place like that.

The fuck? What do you mean, you haven’t had sex?”
“I mean I’ve Never. Had. Sex,” she told me, spacing out her words carefully. “True story. You got a problem with that? Because you’re looking at me like I’ve got herpes and that’s not working for me.”

Next thing you know, Em was surprised to be kidnapped by Liam, who turns out to be “Hunter” from the Devil’s Jacks, a rival MC club. He had been stalking her for a while, and even though he felt more for her than just leverage between the clubs, a job was a job. Still, after weeks of talking on the phone, despite the situation, the two couldn’t help but be drawn together. Despite being handcuffed to a bed, Em never felt like Hunter would hurt her.

“Just remember you can’t keep her.”
“I know”
“Don’t forget–Jacks first. You really like her?”
“Jesus. What is this, Oprah?”

In fact, she was still turned on by him. Even their dry humping was hot.

How’s that, baby?” he asked, thumb starting to work my clit again. “Feel good being turned on by a Devil’s Jack?”

The truce between the Jacks and the Reapers were in a precarious position when one of the Reapers went rogue, but Hunter, despite the kidnapping, really wanted peace between the two clubs, so there was no way he would hurt Em. Still, he is loyal to his club.

“I’d given almost a decade of my life to the club. Never complained, never held back. I’d done terrible things for the Devil’s Jacks. I’d keep doing them, too. All I wanted in return was one thing. One girl. Of course it had to be the girl who could start a war with a phone call.” 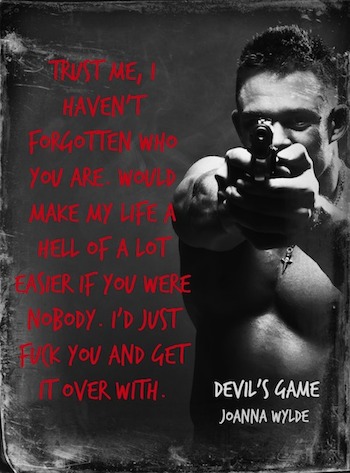 I loved Devil’s Game by Joanna Wylde. The Romeo and Juliet type of storyline was a great set up for a story, and I loved how her dad dealt with it. I really enjoyed reading about Picnic’s relationship with his daughter, and I enjoyed watching the tough guy, ‘Hunter’ fall for Em and stick up for the relationship. I did have issues with the dual POV, and I felt we needed more reminders in the text as to whom was speaking. Though I don’t like to take off stars for editing when I get an advanced copy, in this case, I found it hard to overlook. There were wrong names, misspellings, and some conversations were difficult to follow because of editing issues. I hope these were all fixed in the final copy.

I found myself really wanting Picnic’s story more than anything as I read this one, and I loved the set-up for his installment, Reaper’s Stand, coming October 7.

HAVE YOU HEARD THE NEWS?? My favorite audiobook au

My fur babies are taking turns snuggling with me.

HOT MESS by @emmahartauthor is LIVE and in KU! We

“I see you, Bell. And everything about you is be

I think this may have been my favorite @thebookwor

“Hearing her laugh earlier had been the best kin

Lauren Runow saved me from my book slump! DAY ONE

“I don’t think you’ve ever been wooed. Have

This QUARANTINE ROMANCE from @lauren_runow totally