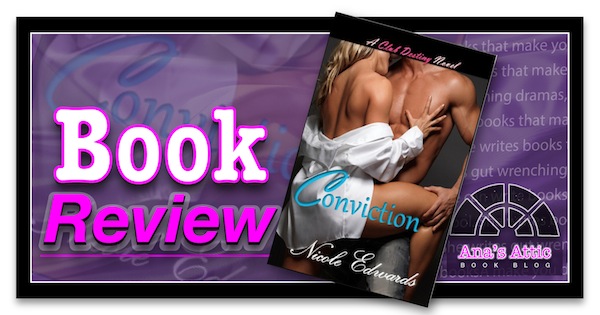 Holy Cannoli, you guys were right! Nicole Edwards is now cemented in my go-to author list when I need to get ‘in the mood’. Holy crap, this woman can write hot-ass, panty melting, kinky, threesomes and foursomes. Damn, Samantha was lucky, I wouldn’t mind switching places with her at least once in my life. 3 guys all there to pleasure me? Well OK, you twisted my arm. 😉 There was also some m-m which I usually don’t get into but it was pretty fucking hot as a small part of Conviction, the first in the Club Destiny Series by Nicole Edwards.

Samantha is a ‘project manager’ for XTX corp and one of their most valuable employees. She is offered a job to move from her small San Antonio branch to Dallas for a higher profile VP position. Before taking the job, she has a video conference with her new boss-to-be, Logan McCoy, who happens to be hot as hell. They have an immediate attraction over the video conference, but know they can’t act on it. But that doesn’t stop them from wanting each other.

“Hi, I’m Samantha Kielty and apparently my body has a thing for yours.”

They worked together, and got to know each other before jumping into the sack, which is something I usually like. There were plenty of workplace scenes, but the author had a habit of telling what was going on instead of showing, and the beginning, especially, dragged a bit. But what drove me completely BONKERS was that we never found out what kinds of projects XTX manages. What do they do?

Logan…mmmmmm…Logan. Bossy, alpha, sexy, caring, sweet, smart, dominant and totally kinky. He loves to watch other guys, especially his identical twin brother, Luke, pleasure his woman, and is totally into threesomes and foursomes. He is completely secure in his sexual tastes, and doesn’t really care what others say.

“Watching you sit on his face while he tongue fucks you makes my dick hard.”

Samantha is a woman who has a very high powered job, likes to be in control, and has been burned. She wants what Logan is offering, but is scared and ashamed of that want. She also cares very much what others say.

“Say my name, Sam. When you come, I want you to know who it is fucking you,” he groaned, pulling back one last time. “Damn it, Sam. fucking say it.”

Sam just couldn’t get over her doubts.

An office romance can piss off a lot of other people, and things got a bit dicey for the couple.

Conviction (Club Destiny 1) was Nicole Edward’s first book, and the first in the Club Destiny series. So there was a good amount of world building (a bit too much) that I think will be gone in the next books in the series. I read the first Alluring Indulgence Series novel, Kaleb, before this, and I found them to be very similar.

Nicole Edward’s books will be added to the top of my Books with Hot Sex and Great Stories list (which is my next to be updated). I absolutely see why so many of you recommended her as the go-to author for hot books. Mr. Ana was a VERRRRY happy man while I was reading this book. No question about it, I will read more from this series when I need a little libido boost. I hear they actually get much better as the series goes on. I look forward to it, but it appears as if the next book is more m-m, something I don’t care enough about to read. So I’m not quite sure where to go from here.

Have you read the series? What are your thoughts?