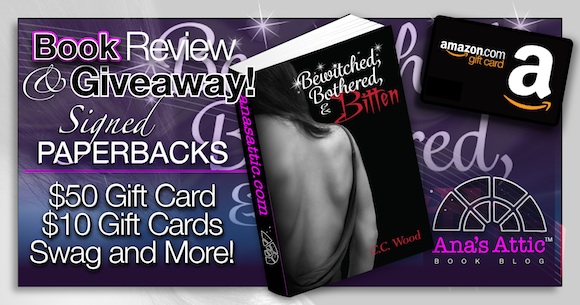 Paranormal romance. 3rd in an interrelated series. Read in order.

I used to read a lot of paranormal books, but over the past few years I have moved away from the genre. But it’s really nice to get back to it occasionally, especially when you are looking for something different. The Bitten Series has always been a favorite of mine for a few reasons: A) It’s funny. B) It’s Hot. C) There is a group of fun girlfriends I love who *may* be based off of my friends and myself. D) It has been kind of paranormal ‘light’ without a lot of alternate world building.

Bewitched Bothered and Bitten was a bit more of a serious entry to the series. Where Donna’s book, Bite Me, was funny and Ivie’s book, Once Bitten, Twice Shy was hot as hell, this one is more serious and paranormally political. We are really getting into the politics of the Vampire/Werewolf/Witch relations. Some of the supernatural creatures, The Faction, want to take over the world, but our group wants to fight against them.

Kerry is a witch. A very powerful witch. She is kind of ostracized in the witch world because her father practiced black magic, but she is still part of the coven, and is named to be the next High Priestess of the coven. The thing is, Vampires, Werwolves and Witches don’t really play well together. But Kerry’s two best friends are with Vampires, another one has some vibes with a werewolf, and Kerry is thrown into situations with them all the time. Finn, the super sexy vampire, seems to have gotten himself attached to Kerry, and though she tries to fight it, it keeps getting harder.

For months he’d pursued me. The first time he came to me in a dream, I thought it was my sex-starved imagination desperate for some relief…”

But the dreams were more than dreams, they were connecting in sleep, and holy crap it was hot! And much as Kerry fought Finn, he continued to come back for more, teasing and challenging her until she gave in.

C’mon, Kerry. Surely, if you’re that unmoved by me, you could kiss me with no problem.”…
“I double dog dare you,” he whispered right before he kissed me.

As the successor to the highest position in the Coven, and one of the most powerful witches in the hemisphere, Kerry needed protection. Of course what does a good alpha male do? Force the girl to live with them for ‘protection’.

The rest of the story was more about the “prophecy” that they find, and how to fight against a super powerful vampire with an even more powerful warlock who is willing to use black magic.

CC seemed to put a lot of research into the witch part of the book. There were a lot of spells and magic, and it really all seemed to be well researched Wiccan spells and rituals (I don’t know that they are, but they seemed to be). To me a good paranormal book requires a really talented writer, because you have to buy into this whole alternate world the author is creating, and it has to feel real enough for you to suspend disbelief. CC does that very well in this book.

Though Bewitched, Bothered and Bitten started out super hot, the majority of the book was action and the mystery of the group solving the prophecy. Still, there were some good sexy scenes that CC writes so well.

I’m going to take you hard and fast, and there’s nothing you can do but lie here and take it.”

As Kerry finally gives into Finn, I really enjoyed her letting down her guard. 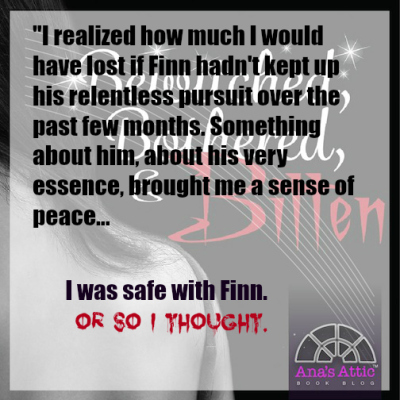 While this isn’t my favorite of the series, I am still intrigued and enjoying it enough to look forward to Ricki and Shannon’s books. Bewitched, Bothered and Bitten didn’t have all the humor of the first book, or the hot sex of the second, but it has more excitement, and I am very impressed with the research and world building. This one is good for even the serious paranormal fan. 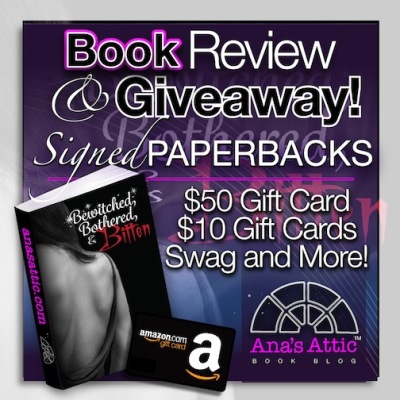