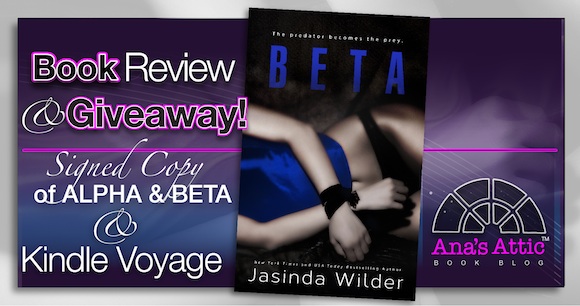 Beta does not stand alone, though it is a whole new storyline. The thing I really loved about Beta was the demonstration of love between Kyrie and Valentine. The one thing I had really wanted in Alpha was Valentine’s point of view, though I was a bit worried, because often times when we see the vulnerability in the man’s POV, they don’t seem quite as alpha and commanding. I was thrilled to see that in Beta, Jasinda brought in his POV, and yes, we were really able to see his weaknesses, but I never felt like it turned him into a simpering pussy at all.

I realized how deep and intense my feelings for him were. I wanted to be with him every second of every day. I lived for the moments when I could make him smile, when I could see the soft, tender side of him that only existed for me.”

Then after months of travel, and waking up to morning sex every day, Kyrie is in the South of France and wakes up to an empty bed. And a note pinned to Valentine’s pillow with a knife.

The excitement begins immediately when Kyrie calls Harris to help her find him. From then we have an edge-of-your-seat thrill ride a-la Bourne Identity or Mission Impossible.

Keep going. Don’t let him catch you. Ram him off the road if you have to.”

Kyrie has gone from being broke and starving to being in love and traveling the world to being in gunfights and running for her life in only a few short months.

He was gone. My idyllic little world–traveling with my Valentine, eating and drinking and fucking and sailing and hiking and LIVING–had been shattered.
I’d been shot at. Chased….and now I’m supposed to take a gun and shoot people with it?”

When Valentine wakes up, tied spread eagle to a bed, he knows just where he is when he sees the beautiful surroundings of the Greek island Oia out the window.

You’re mine. You’ve always been mine. You were my favorite, Val. There’ve been others, of course, but none of them was YOU. They couldn’t satisfy me the way you did….You’ve had LOTS of practice. You should be able to satisfy me now. It’s been a long time since I’ve been truly satisfied with a man.”

Jasinda truly pushed limits in this book, and there were definitely a number of scenes that are not easy to read.

What Kyrie and Valentine go through could damage even the strongest people and relationships. With their rocky start, will they survive it? 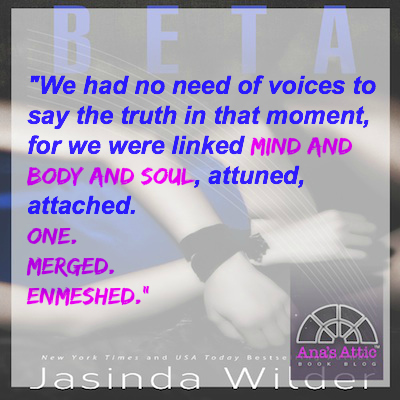 Jasinda certainly didn’t take any easy ways out in this book. She jumped in to a controversial storyline, and gave it an ending that not everyone will love. The only thing predictable in Beta is the amount of “Jasinda sex”. I’ve kind of given it a name now, because the woman writes EPIC lovemaking scenes. It doesn’t matter where the couple is or if the world is crumbling around them, the couple will have a majorly epic sex scene that goes on for pages and pages. Believe me, though there is lots of action in this book, there is more than a lot of action in the bedroom as well.

Despite a few things I wasn’t thrilled about, I still have no choice but to give Beta 5 stars. (***The more I thought about it and looked into it, the more the unfinished end, and a completely dumb move on Valentine’s part ruined it for me, so I have since lowered it to 4.5 stars.***) It was a lovely tribute to a couple who really and truly would do anything for each other. It kept me up all night clutching my Kindle, it was hot and sexy, and took many surprising twists and turns. I would love to see more in this series, and I think Jasinda left it wide open for a great Harris and Layla book, which will help wrap up loose ends in this story yet still tell a completely new tale. I hope she follows up with it!

Hear a sample from audible 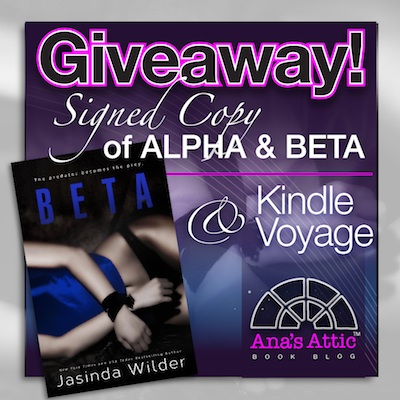